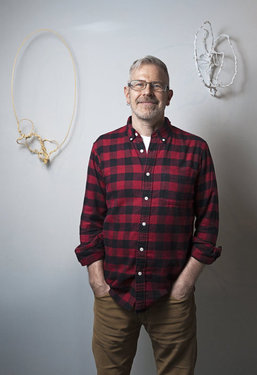 Inspired initially by the aesthetics and philosophies of the New York School and Asian art, Schatz’s work explores the sensuality of gesture and line and the dynamism of pictorial and sculptural space. Museum director Thomas Sokolowski has described his work as "lush skeins of finely measured and almost mathematically paced staves of pure feeling."  The Paris-based poet Nina Zivancevic has written that his work “attests to the futility of our attempts to tame the wild and unpredictable.” Curator Jonathan Frederick Walz of The Columbus Museum has stated “the complex, self-contained lines he creates could be interpreted as abstract narratives, with beginnings and ends – and multiple plot twists in between.”

Schatz was born in 1958 in Allentown, Pennsylvania.  His work has been exhibited over the past three decades in Austria, Bulgaria, Canada, France, the UK, as well as in the United States.  Museum venues have included The Noyes Museum of Art of Stockton University, Sheldon Museum of Art (Lincoln, Nebraska), Sofia Art Gallery (Sofia, Bulgaria), Landesmuseum Oberösterreich (Linz, Austria), and the Derby Museum (Derby, UK).  Project and gallery venues have included Jason McCoy Gallery, Deborah Berke Partners, The Phatory LLC, The Painting Center, and Nicholas Davies Gallery (all New York), Curious Matter and Art House (Jersey City), The Institute for American Art (Portland, Maine), The Green Door Gallery and Pluto (Brooklyn), Exile (Berlin), Gallery Pixi (Paris), and the South London Gallery.  University and college venues have included Southern Methodist University, the University of Scranton, Cedar Crest College, Marymount Manhattan College, and the University of Strathclyde (Glasgow).  His art is in the permanent collections of the Harvard Art Museums, the Sheldon Museum, the US State Department, Southern Methodist University, the University of Scranton, Pfizer, and The JBG Companies, as well as in many private collections in the United States, Canada, and Europe.  He has also provided album artwork to the indie band Vovete.